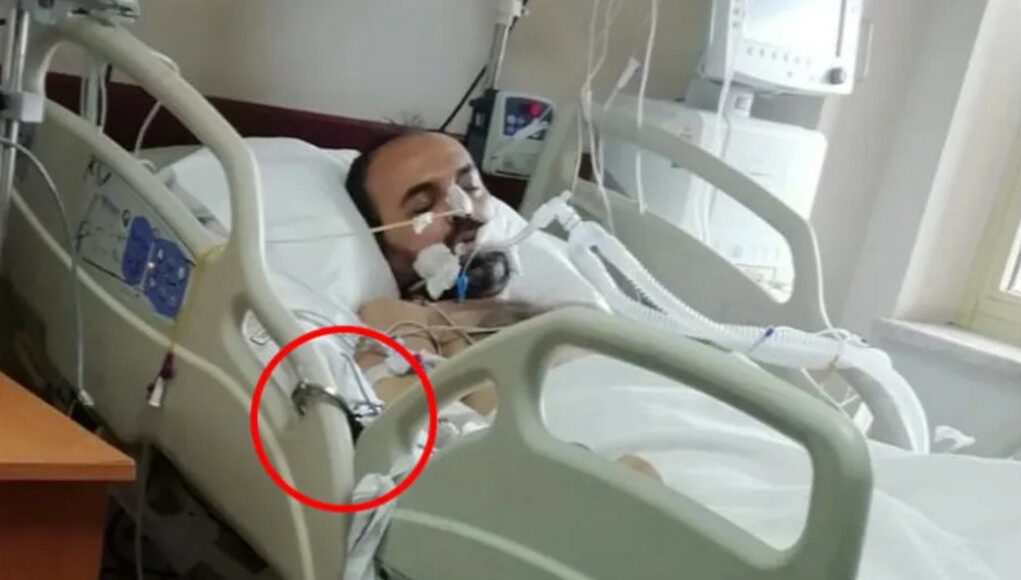 Recently emerged photographs have revealed that a former decorated police officer who died last year of COVID-19 was handcuffed to a hospital bed while intubated for 35 days, the Stockholm Center for Freedom reported, citing the Tr724 news website.

Ömer Faruk Gergerlioğlu, human rights defender and deputy from the Democratic Peoples’ Party (HDP), shared on Twitter hospital photographs of Veysel Atasoy, who died after being intubated for 35 days. “We will continue our demand for justice,” said Gergerlioğlu. “We have submitted a parliamentary question addressing both the Ministry of Health and Ministry of Justice about this scandal.”

Stressing that it was unacceptable that a sedated and critically sick person was handcuffed to a bed for more than a month, Gergerlioğlu said those responsible would be brought to justice.

Atasoy was arrested in September 2016 for alleged links to the Gülen movement. He was handed down an eight year, nine month sentence.

Turkish President Recep Tayyip Erdoğan has been targeting followers of the Gülen movement, inspired by Turkish Muslim cleric Fethullah Gülen, since the corruption investigations of December 17-25, 2013, which implicated then-Prime Minister Erdoğan, his family members and his inner circle.

Atasoy started showing symptoms of COVID-19 but was taken to the hospital very late. According to a diary he kept during his sickness, Atasoy asked several times to receive medication and to be taken to see a doctor but was turned down by the prison administration.

When he was finally taken to a hospital, Atasoy was not admitted to the intensive care unit because the gendarmerie would not be able to accompany him. After long arguments with the doctor, who insisted Atasoy needed special care, the gendarmes gave in, but it was already too late.

Atasoy’s family have said he was a victim of gross negligence.

The rapidly spreading COVID-19 has presented greater concerns in Turkey’s prisons, which were already notorious for human rights abuses, overcrowding and unsanitary conditions before the pandemic. The death of political prisoners has revealed once again how the Turkish government puts their health in danger.

The purge of thousands of dissidents in the aftermath of a coup attempt in July 2016 has filled Turkey’s prisons, which today are overcrowded with tens of thousands of political prisoners.

According to Yunus Alkaç, director general of Prisons and Detention Centers, 50 inmates have died of COVID-19 in Turkey’s jails since the outbreak of the coronavirus pandemic in the country in March 2020.

The Turkish parliament passed an early parole law on April 14 aimed at reducing the inmate population of the country’s overcrowded prisons due to the coronavirus pandemic. Yet, the legislation excluded political prisoners, including opposition politicians, journalists, lawyers, academics and human rights defenders convicted under the country’s controversial counterterrorism laws. The law prompted calls from the UN, the EU and rights groups for the non-discriminatory reduction of prison populations.