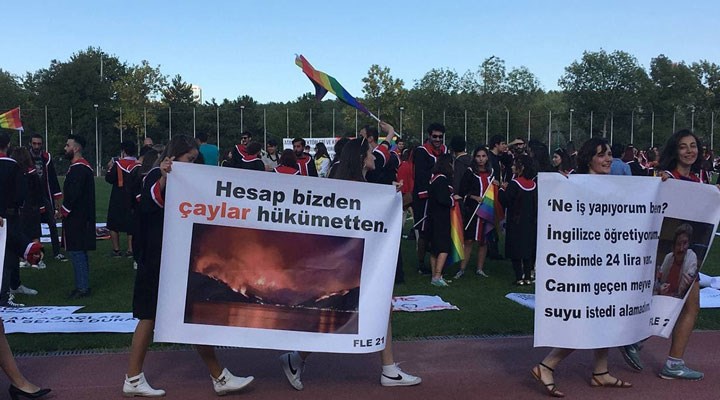 Five students from Middle East Technical University (ODTÜ) were taken into police custody on Sunday ahead of the school’s graduation ceremony, which is usually a venue for criticizing recent political events and government actions, the Anka news website reported.

The students were detained because they refused to let plainclothes policemen check their IDs and the placards they intended to carry during the ceremony, Anka said.

ODTÜ graduation ceremonies have for years featured a display of humorous and critical placards about current political developments in Turkey.

Organized solely by the graduates, Sunday’s event was held in the absence of rector Verşan Kök, who canceled it due to the increasing number of COVID-19 cases in the country.

The students’ placards criticized Turkey’s withdrawal from the Istanbul Convention, the rising number of femicides, President Recep Tayyip Erdoğan’s recent move to toss packages of tea to people who had lost their homes and livelihoods in forest fires and floods during visit to disaster areas and growing government hostility towards Turkey’s LGBT community, among other issues.

The students also protested rector Kök, who was appointed by Erdoğan in July 2016, although he had not received a majority of votes in an intra-university election.

In 2018 four ODTÜ students were arrested by an Ankara court and kept behind bars for a month for insulting Erdoğan by holding a placard bearing a caricature that was first published in 2006 by the Penguen political satire magazine, titled “Tayyipler Âlemi” (World of Tayyips).

An investigation was also launched into more than 20 students at the university for unfurling a rainbow flag, commonly known as the gay pride flag or LGBT pride flag, a symbol of lesbian, gay, bisexual and transgender (LGBT) pride and LGBT social movements, during the 2018 graduation ceremony.

According to a report released by the Human Rights Foundation of Turkey (TİHV) in April, ODTÜ is among the top five campuses where students’ rights were violated the most between 2015 and 2019.