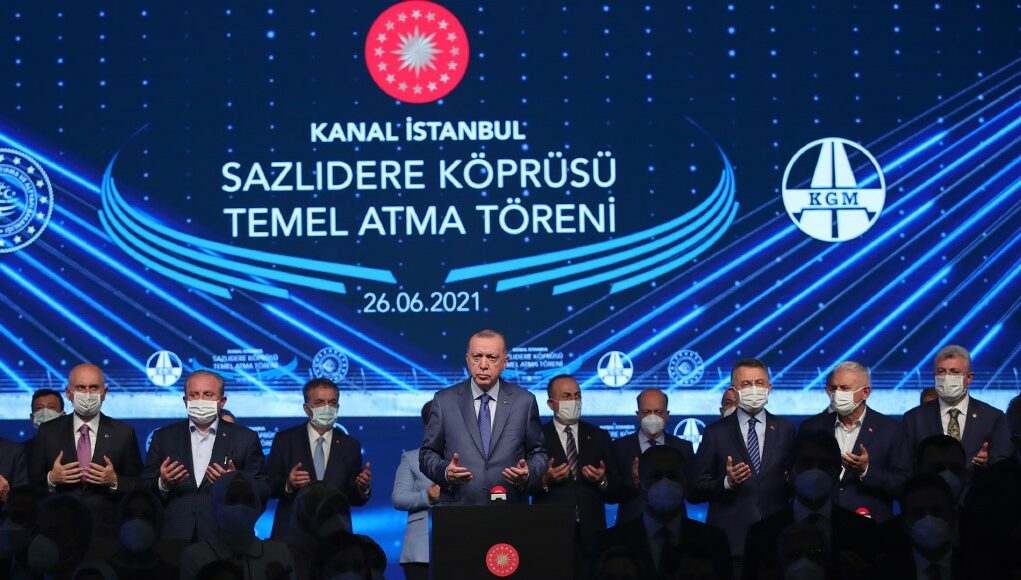 Turkish President Recep Tayyip Erdoğan took the first step toward the realization of the highly controversial Canal Istanbul project, laying the foundation stone of the Sazlıdere Bridge on June 26, one of six spans that will cross the canal. The Turkish leader, who had dubbed the project as “crazy,” says the 45-kilometer artificial sea-level waterway, connecting the Black Sea with the Marmara Sea, aims to minimize shipping traffic in the Bosporus. However, opposing voices have since grown louder amid concerns over the significant environmental cost at which the project comes. The project threatens 40 percent of Istanbul’s fresh water sources, opening a channel for the waters of the Black Sea to mix with the Marmara, which could lead to the Black Sea substantially polluting the Marmara. With regards to the geopolitical implications of the project, alarms were raised when Erdoğan said that “this project will have an exponential impact on Turkey’s strategic strength in the Black Sea,” where close NATO-Russian military encounters are now occurring.

Erdoğan’s main strategy is to build another canal to create a waterway in Istanbul where Europe meets Asia and where the rules of the 1936 Montreux Convention will not apply. The convention limits the amount of military hardware passing through the Bosporus at any given time.

Turkish opposition leaders have strongly opposed the costly project, and Erdoğan is reportedly looking to external financing to fulfill his dream of the canal project. Istanbul Mayor Ekrem İmamoğlu, who ended Erdoğan’s 25-year-long Islamist rule in the country’s largest city on June 23, 2019, in a re-run of Istanbul’s mayoral election, told the media that Canal Istanbul rather than being a grand project is merely a tactic to win the upcoming 2023 presidential election. İmamoğlu argued that Erdoğan laid the foundation stone for a bridge link to the North Marmara highway project rather than for the Istanbul canal.

The leader of Turkey’s main opposition Republican People’s Party (CHP) in a tweet warned possible international investors against involvement in the project. The tweet, which was translated into English, German, French and Arabic, read: “Institutions that fund the Canal Istanbul project, which is contrary to the interests of my nation and world climate policy, will not receive reimbursement from the treasury of Turkey. Compensation will also be sought for any destruction of the environment that the project causes.”

Environmental scientists have warned that the new canal is likely to upset the deep counter-currents between the Black and Marmara seas and that the canal, acting as a siphon, will suck up the polluted waters of the Black Sea that will ultimately end up in the Mediterranean.

Turkish Foreign Minister Mevlüt Çavuşoğlu stated at a joint news conference with his Russian counterpart, Sergey Lavrov, in Turkey’s Mediterranean resort city of Antalya on June 30 that Canal Istanbul would not affect the 1936 Montreux Convention on the Turkish Straits. Lavrov mentioned that Turkey would not be opening an alternate canal to allow foreign military deployments in the Black Sea and confirmed that Russia remains committed to working with Turkish authorities on the implementation of the Montreux agreement. The Montreux Convention states that the total number and the maximum aggregate tonnage of all foreign naval vessels that can be in the course of passage through the Turkish Straits are limited to nine and 15,000 tons, respectively, and that the maximum aggregate tonnage which non-riparian states may have in the Black Sea is 45,000 tons. Vessels of war belonging to non-riparian states cannot remain more than 21 days in the Black Sea. The notification time is eight days for vessels of war belonging to riparian states, and 15 days for those of non-riparian states.

Thus, the planned Istanbul canal poses a greater risk to Russia than it does to NATO. The treaty limits the presence of NATO naval forces; hence, Moscow does not currently face a significant a security threat from NATO in the Black Sea.

Erdoğan’s Justice and Development Party (AKP) has embarked on many notable mega projects including a third Istanbul bridge, the Osman Ghazi Bridge and the Eurasia Tunnel as well as Istanbul Airport, one of the largest in the world. Turkey’s Treasury has guaranteed public-private partnerships (PPP), and build-operate-transfer (BOT) projects cost Turkish taxpayers millions of dollars annually. Independent Turkish press agency Bianet reported that Turkey will pay 140 billion lira ($20.4 billion) for PPP projects over the course of 25 years. In all of the projects, the usage of facilities is lower than what the state guarantees.

The Canal Istanbul project is the most ambitious yet of AKP-led projects, and local banks have steered clear, unwilling to take the risk in view of the fact that previous projects have not been profitable. The canal reportedly comes at a price tag of $15 billion, but the real figure was estimated at a recent developers’ conference in France to be $65 billion, The Guardian reported.

The Erdoğan government plans on completing the canal within five to six years, but experts estimate that it will take more than 20 years, and international banks are highly unlikely to finance a project of that length. Concerning financing prospects, there is a strong possibility of China funding the channel since Beijing has already provided billions of dollars in loans to the AKP government, which is in a currency and debt crisis. The reason for this is presumably to ensure that Turkey becomes a vital part of its Belt and Road Initiative (BRI). According to many news websites, Istanbul’s Yavuz Sultan Selim Bridge — one of the tallest in the world — was sold to Chinese investors for $688 million.

The Istanbul canal was first proposed during the reign of the Ottoman empire’s most powerful sultan, Suleiman the Magnificent, in the 16th century. It had since then been considered numerous times until 1994, when Turkey’s late Prime Minister Bülent Ecevit proposed an Istanbul canal, but the project never materialized for various reasons. Turkish rulers have for centuries followed a balanced style of politics between the powerful states of the East and the West. Erdoğan now seeks to realign the global balance of power to have exclusive control of the Istanbul canal. The new waterway will be a key strategic crossing point for US and European naval forces to limit Russia’s power in the Black Sea and to prevent Moscow from conducting naval exercises in the Mediterranean Sea.