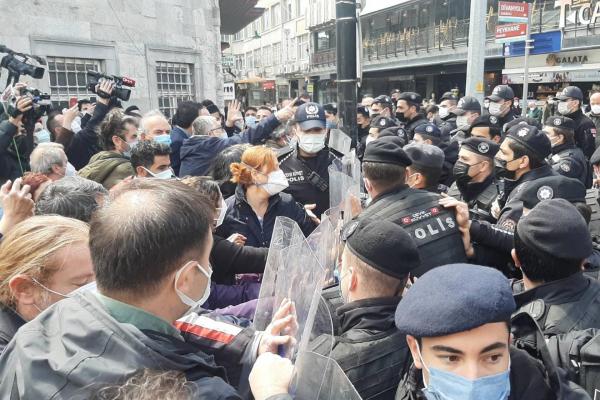 Police on Thursday intervened in a protest by the Turkish Medical Association (TTB) calling on the Justice and Development Party (AKP) government to tighten coronavirus restrictions to stop the latest surge in infections and fatalities in Turkey, where daily new cases have exceeded 60,000.

The Anka news agency reported on Thursday that police would not allow representatives from the TTB and several other labor and health unions to march from the Çemberlitaş tram station to the İstanbul Provincial Healthcare Directorate in Fatih.

Although the protestors were prevented from marching to the directorate, they read a joint public statement in Çemberlitaş Square while holding a placard that said “We’re not giving up on our right to life. Stop the fatalities. You’re the ones responsible for this,” addressing the AKP government.

“The recent restrictions won’t stop the [COVID-19-related] deaths [in Turkey], and they won’t change the harsh conditions healthcare workers in Turkey face,” the protestors said in the statement read out by Güray Kılıç, a board member of the TTB and the İstanbul Medical Chamber (İTO).

President Recep Tayyip Erdoğan earlier this week announced a tightening of coronavirus restrictions that included imposing earlier evening curfews, prohibiting in-person dining at restaurants and cafes, canceling weddings and other big social events and restricting the use of public transport for those over 65 and under 20 years of age during the holy month of Ramadan.

“[The effect of] the pandemic hits the poor and the working class the hardest. We are burying a planeload of people every day. We are facing … poor management of the pandemic. Those in power close their ears to the sound of professional associations and implement decisions that serve economic purposes. This [new] package of restrictions is only aimed at stalling people,” Kılıç added. 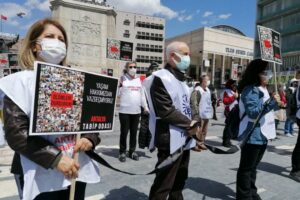 Underlining that the AKP was too late in tightening COVID-19 measures and thus failed to prevent fatalities that could have been prevented, the statement urged Erdoğan’s ruling AKP to accept that their current healthcare policy is unsuccessful and to establish a new system that promotes the involvement of healthcare associations in the decision-making process.

The protestors further urged the AKP to immediately shut down such crowded indoor areas as shopping malls, restaurants, cafes, factories and workshops without causing any economic loss to the workers, to carry out a more effective vaccination campaign and to recognize COVID-19 as an occupational disease.

Since inoculations began on Jan. 14, Turkey has administered 19.8 million shots. While over 12 million people have received the first dose of the vaccine, more than 7.7 million of them have been administered a second dose.

Meanwhile, Şebnem Korur Fincancı, a prominent human rights activist and head of the TTB, on Friday told the Gazete Duvar news website that they held meetings with representatives from nine of Turkey’s opposition parties, including the main opposition Republican People’s Party (CHP), in the past week.

“All of the parties follow the TTB’s statements and think our advice regarding ways to curb the coronavirus spread in the country is important. They all agreed that the economic downturn is the main reason stricter measures can’t be taken [in Turkey] while battling the pandemic,” she said.

Turkey on Thursday reported 61.400 new infections and 297 fatalities, the highest since the outbreak of the pandemic on March 11, 2020. The total number of cases in the country has exceeded 4 million while the death toll stands at 35,031.