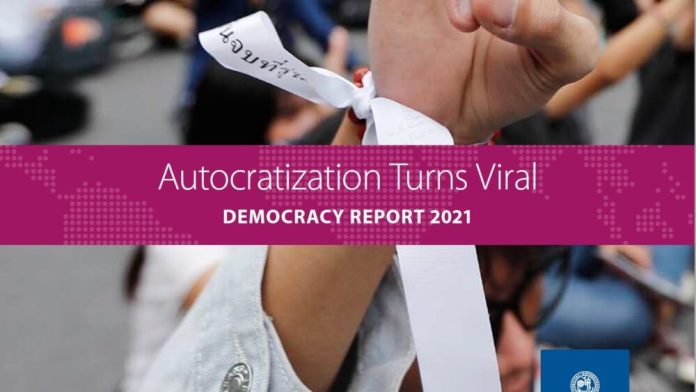 Turkey is among the countries that “autocratized” the most, together with Poland and Hungary, according to the “Democracy Report 2021,” which was published by the Swedish-based Varieties of Democracy (V-Dem) Institute.

According to a report in the Stockholm Center for Freedom, while Denmark, Sweden and Norway scored the highest points in the liberal democracy index, Yemen, North Korea and Eritrea scored the lowest. Turkey was classified as an “electoral autocracy” and ranked 149th after Egypt, Eswatini and Republic of the Congo and above Rwanda and Vietnam.

The report was prepared with the contribution of more than 3,500 scholars and other country experts and measures hundreds of different attributes of democracy. V-Dem Institute says they produce “the largest global dataset on democracy with almost 30 million data points for 202 countries.”

According to the report there are notable commonalities in the way “autocratization” unfolds across varying contexts.

“Media and academic freedoms, and civil society, are typically repressed first. Alongside that, ruling governments often engage in polarization by official disinformation campaigns disseminated via social media and by increasing disrespect for counterarguments from political opponents,” the report says. “Only then are formal institutions such as the quality of elections undermined in a further step towards autocracy.”

According to the study, the level of democracy enjoyed by the average global citizen in 2020 is down to the levels around 1990.

The number of democratizing countries is also dwindling according to the report, down almost by half compared to 10 years ago – now 16 that are home to 4 percent of the global population.