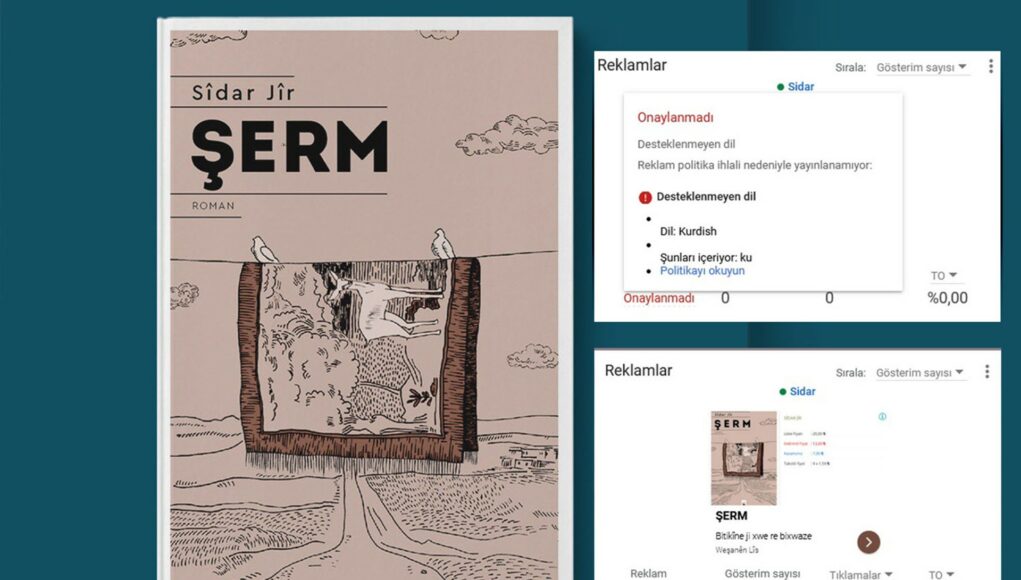 Writer Rêzan Tovjîn has said the Turkey team of Google Ads is responsible for rejecting a request to advertise a book titled “Şerm” (Shame), which was written in the Kurdish language by Sidar Jîr, according to a report by the Mezopotamya news agency (MA) on Wednesday.

“I paid Google the necessary amount for the advertisement. I prepared a photo of the book and a URL of its publishing house. Google Ads refused my request to promote the book since the advertisement was written in Kurdish,” Tovjîn told MA.

The writer claimed that the rejection was because of the Turkish translation team of Google Ads since he experienced a similar incident back in 2007, this time with the Turkish employees of Facebook.

Saying that another advertisement he submitted to Facebook in 2007 on a book written in Kurdish by Helîm Yûsiv was rejected, Tovjîn added: “That’s when I realized Facebook Turkey, or its Turkish employees – the ones responsible [for Turkish content] – don’t approve any ads besides those in Turkish.”

The writer further told MA that he then sent a request to extend the use of Kurdish on Facebook and that it was approved by the platform soon afterward.

Throughout most of the 20th century, successive governments have imposed outright bans on or suppressed use of the Kurdish language in Turkey.

Since an attempted coup against Turkish President Recep Tayyip Erdoğan and his ruling Justice and Development Party (AKP) in July 2016, the government has shut down a number of Kurdish language institutes, dailies, websites and TV channels as part of a crackdown targeting the Kurdish political movement.