Minority newspapers in Turkey are struggling to survive 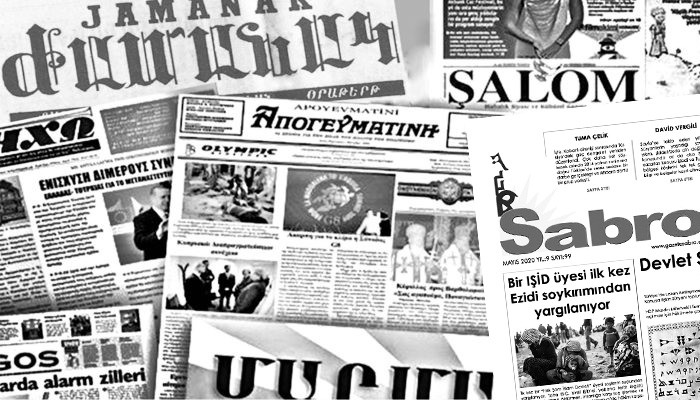 First Ukraine grain ship docks in Turkey after being turned away

Turkey’s Press Advertising Agency (BİK), the state body responsible for regulating publicly funded advertisements in the media, during its last general assembly of 2020 on Nov. 18 was supposed to decide on the continuation of state assistance to minority newspapers. According to the Agos Armenian weekly, BİK failed to make the decision and did not provide any reason for the cut in funding.

BİK Director General Rıdvan Duran denied the news and stated that BİK had not announced an official decision regarding financial support for 2021 or delayed payments for 2020.

“BİK did not issue a decision at the last general assembly, but the assistance will continue,” Duran said. According to the director general, the details of the next state payments will become clear after the February 2021 general assembly.

On the other hand, Mehmet Çelik, coordination director at BİK, claimed BİK had not made a profit during the pandemic and therefore had not reserved funds for minority papers. “But that doesn’t mean BİK won’t provide the aid for 2020 in 2021. The assistance could be distributed after the February meeting,” he added.

BİK has been providing financial aid to minority newspapers since 2011, when the Greek Apoyevmatini newspaper found itself in financial difficulty, prompting Editor-in-Chief Mihail Vasiliadis to raise the problem.

Turkey’s minority newspapers had received official advertisements until the 1970s, after which the government stopped placing them. Instead of allowing them to publish official ads, BİK started providing them with annual financial support in 2011.

Turkish Minute spoke with Garo Paylan, a deputy for the Peoples’ Democratic Party (HDP), who underlined that BİK’s financial support should be provided as a matter of course. “The Turkish state is behaving arbitrarily regarding these payments. The current political situation in Turkey is influencing BİK’s decisions,” said Paylan.

“If the state has an ultimate goal of helping minority newspapers to survive, financial support must be allocated from the public budget. We are currently discussing the budget for 2021, but there have been no developments in this area. The state did not allocate even two pennies from the budget to preserve the language and culture of minorities. In the past, we [the HDP] made proposals for direct support from the budget, but all of them were rejected,” Paylan told Turkish Minute.

BİK decided that “the Armenian, Greek and Jewish communities, regarded as minorities under the Lausanne Peace Treaty, will be the supported newspapers published in Turkey” in 2011. Turkey does not recognize the Syriacs as an indigenous non-Muslim minority under the Lausanne Treaty, and as a result Syriac newspapers were not granted the same financial support.

Life is getting harder every day for minority newspapers in Turkey. They have been struggling to survive in difficult circumstances, with an increase in publishing costs and a decrease in advertisements the main obstacles for these newspapers.

Because of the coronavirus pandemic and other additional financial hardships, minority newspapers were facing challenging times in April 2020 and decided to ask BİK to provide the annual financial support earlier than usual, but Agos stated the agency instead cut it completely.

Turkish Minute spoke with Yetvart Danzikyan, editor-in-chief of the Agos Armenian weekly, who thinks BİK’s decision will make it even more difficult for these media outlets to continue operating.

According to Danzikyan, minority newspapers generate revenue largely through subscriptions, advertising and sales. Most of the advertisements such as death, marriage and baptism announcements and ads during religious holidays come from community members and establishments.

“These sources are limited and insufficient. Due to the pandemic, we publish our newspapers under difficult conditions as advertising revenues have largely been cut. There have also been some problems with distribution. So BİK’s support was even more vital and badly needed this year,” Danzikyan told Turkish Minute.

HDP deputy Paylan, however, thinks the support is a small amount of money for the state but very significant for minority newspapers with their tight budgets and as a result is important for their survival.

“According to BİK’s new statement, a payment will be made in February, but I’m still not sure of that. We all know the political climate will determine what happens next year,” he said.

All newspapers in Turkey are going through a tough period. Freedom of expression is under increasing attack, which negatively affects minority publishing capabilities. Senior citizens want to have the newspaper in their hands; therefore, editors-in-chief can’t abandon print editions, which cost significantly more to produce than online editions.

“It’s obvious we will have more difficulties next year. The agency’s negative decision will make it even more difficult for us to continue operating. According to BİK, this year’s support will be distributed in February. We’ll wait and see. We are trying to reach new audiences by running subscription campaigns. We are also working on encouraging our readers to buy digital subscriptions. I don’t know how successful we will be, but all minority newspapers are doing their best,” said Danzikyan.