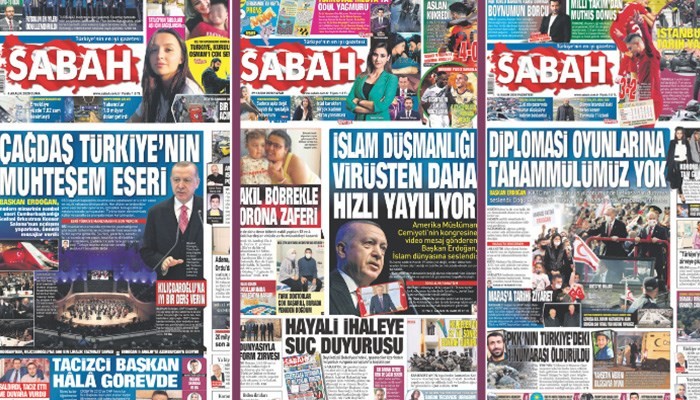 Turkish President and Justice and Development Party (AKP) leader Recep Tayyip Erdoğan has been featured in the pro-government Sabah daily’s lead story 106 times between Jan. 1 and Dec. 6, 2020 and was rarely absent from the newspaper’s front page during that time period, a media ombudsman has revealed.

In remarks that appeared in the Birgün daily on Monday, journalist and media ombudsman Faruk Bildirici said such extensive coverage of the president shows that the newspaper is not engaged in journalism or seeking independence but rather is spreading propaganda.

“Journalists should look at the newsworthiness of the remarks of a politician first before reporting on it,” he noted.

Sabah is run by the pro-government Turkuvaz Group, Turkey’s largest media corporation, which is headed by Serhat Albayrak. Albayrak is the brother of Berat Albayrak, Erdoğan’s son-in-law and Turkey’s former finance minister.

“If other politicians had been given the same amount of coverage, I would think the newspaper cared about journalism, but that’s simply not the case,” said Bildirici.

Opposition politicians in Turkey generally get little to no coverage in the newspapers and TV stations run by pro-government media companies. These politicians are ignored even by the country’s state-run news agency, the Anadolu news agency, and Turkish state broadcaster TRT.

Bildirici said other pro-government newspapers such as Yeni Şafak and Akşam are no different than Sabah when it comes to their interest in Erdoğan.

“I think the journalists in the newsrooms of these newspapers leave the major story blank until Erdoğan makes a speech that day. In consideration of journalism, the remarks of a politician cannot be the only news. You can focus on something in his remarks, analyze it and report on it,” said Bildirici.

Erdoğan has been harshly criticized for putting the Turkish media under his absolute control, particularly after a coup attempt in Turkey in July 2016. Following the failed putsch, dozens of critical journalists were arrested while hundreds of media outlets were closed down as part of a government-led post-coup crackdown.

One of the leading jailers of journalists in the world, Turkey was ranked 154th out of 180 countries in the 2020 World Press Freedom Index published by Reporters Without Borders (RSF) in April.