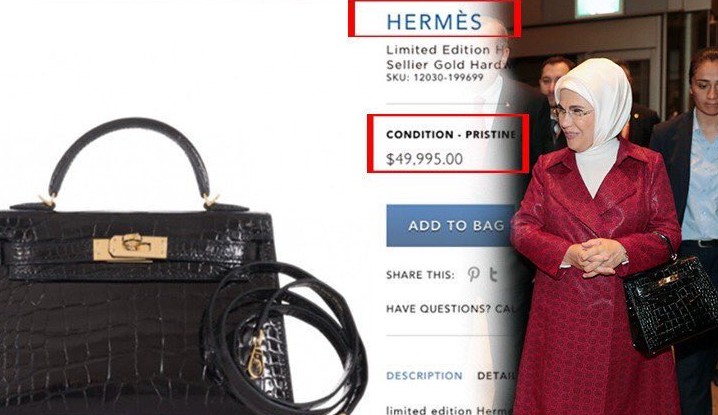 A journalist working for Turkey’s left-wing Evrensel daily has been cleared of the insult charges he faced due to an article he wrote about a Hermès handbag belonging to Turkish first lady Emine Erdoğan.

Journalist Ender İmrek appeared at an İstanbul court on Tuesday in the third hearing of his trial, based on article he wrote in the daily on June 29, 2019 under the headline “Hermès handbag was blazing.”

İmrek wrote about the $50,000 Hermès handbag Emine Erdoğan carried while accompanying her husband, President Recep Tayyip Erdoğan, on a visit to Japan for the G20 summit in the summer of 2019.

He said at a time when many Turks are struggling with financial problems and unemployment, the first lady didn’t give a second thought to carrying such a luxurious handbag.

“Carrying a $50,000 purse, ignoring the misery and poverty of the people, is not considered an insult against our people, but saying a few critical words about the president could result in a trial and then jail,” İmrek wrote.

He was referring to the case of Canan Kaftancıoğlu, a politician from the main opposition Republican People’s Party (CHP), who back then was appearing in a court on charges of insulting the president.

İmrek was charged with insult on the grounds that he denigrated Emine Erdoğan “by not referring to her favorably,” the first time such a charge has been leveled in the history of the Turkish judiciary, according to the journalist.

İmrek’s lawyer Yıldız İmrek told the court on Tuesday that her client’s views are within the right to freedom of expression and the press and that the indictment implies that everyone has a responsibility to praise the first lady.

The court decided to acquit the journalist on the grounds that the elements of a crime were not present.

Thousands of people in Turkey are under investigation, and most of them are under the threat of imprisonment, over alleged insults of President Erdoğan, his family or Justice and Development Party (AKP) members. The insult cases generally stem from social media posts shared by Erdoğan opponents. The Turkish police and judiciary perceive even the most minor criticism of Erdoğan or his government as an insult.