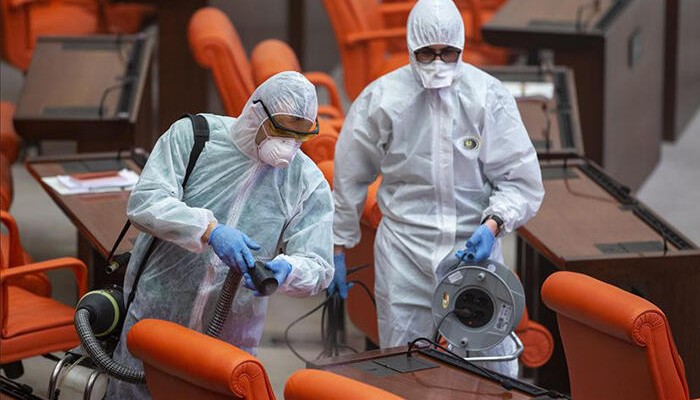 Close to 100 lawmakers in the Turkish Parliament have contracted COVID-19, with one MP infected more than once, the Gazete Duvar news website reported on Saturday.

One in every six lawmakers in parliament, which has a total of 584 members, has caught the virus since the first case was confirmed in the country on March 11, the report said.

Turkey’s ruling Justice and Development Party (AKP), which has a total of 289 members in the legislature, leads in the number of COVID-19 cases with 57 of its lawmakers infected with the virus until now.

The cases, which amount to 20 percent of all the party’s lawmakers, include Deputy Parliament Speaker Süreyya Sadi Bilgiç, Deputy Chairman Mehmet Özhaseki and deputy Vahit Kiler, who has reportedly contracted the virus twice.

According to Duvar, nearly 20 AKP lawmakers are currently undergoing treatment for coronavirus either in a hospital or at home.

Eighteen out of the 138 members the main opposition Republican People’s Party (CHP) has in parliament have been infected with the coronavirus since March, while 11 members of the pro-Kurdish Peoples’ Democratic Party (HDP), which has a total of 56 lawmakers, have tested positive for COVID-19.

Only four out of 36 MPs from the Good (İYİ) Party have contracted the virus as well as four of the Nationalist Movement Party’s (MHP) 48 deputies.

As of Nov. 23, some 6,000 people working in parliament along with the lawmakers will be asked to provide their COVID-19 code given by the state, which indicates whether or not a person is infected with coronavirus, before entering the parliament building.

The deputy chairmen of the parliamentary groups also met during the last week and discussed other measures to prevent the coronavirus from spreading further among lawmakers and staff.

The talks reportedly focused on determining a time limit for general assembly and committee meetings. MPs above 65 years of age and those with chronic diseases are also not expected to attend meetings in the coming weeks unless their presence is mandatory.

The measures came after survey results released by the Turkish Medical Association (TTB) on Friday showed that the number of COVID-19 cases in Turkey has tripled in the last month, reaching 1 million, with more than 47,000 daily cases countrywide.

Turkey’s Health Ministry, which has been criticized for lacking transparency in announcing coronavirus statistics, has noted only a few thousand daily cases in the country over the past week.

“Turkey has come to a point where a person dies from COVID-19 every 10 minutes, even according to official data from the Health Ministry,” TTB family medicine branch secretary Nuri Seha Yüksel warned on Friday.