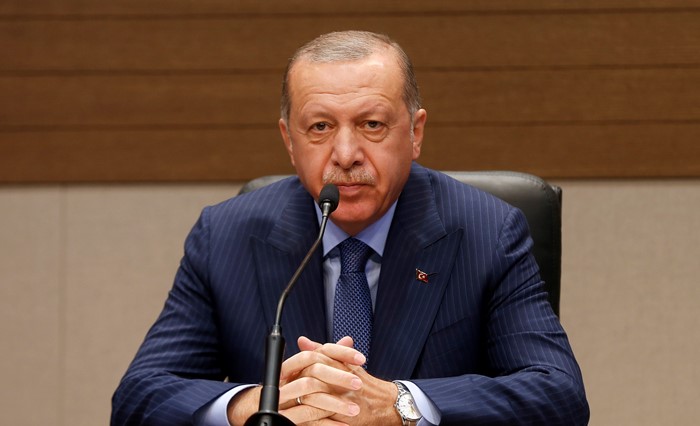 President Recep Tayyip Erdoğan has claimed he was unaware that Osman Öcalan, brother of jailed leader of the outlawed Kurdistan Workers’ Party (PKK) Abdullah Öcalan, had previously been the subject of an Interpol red bulletin request from Turkey, the Diken news website reported.

Erdoğan’s comments came amid public outrage over an appearance by Osman Öcalan on the state-run TRT broadcaster prior to last week’s mayoral election in İstanbul.

“I did not know that Osman Öcalan had been sought on a red notice. If he appeared on TRT Kurdish, it concerns our friends there. I trust them,” he said in response to a question during a press briefing in Ankara.

In 2015 Turkey’s Justice Ministry sought the issuance of an Interpol red notice for Osman Öcalan and his extradition to Turkey from northern Iraq due to his links to the terrorist acts of the PKK.

Osman Öcalan is the brother of Abdullah Öcalan, who is serving a life sentence on conviction of running a terrorist organization and who also came to public attention last week by issuing a surprise call to Kurdish voters to remain impartial just a few days before Sunday’s vote in İstanbul.

His comments were interpreted as tacit support for Erdoğan’s ruling Justice and Development Party (AKP) and a last-ditch attempt by Erdoğan himself as the Kurdish political movement’s Peoples’ Democratic Party (HDP) had so far sided with popular opposition nominee Ekrem İmamoğlu.

Öcalan’s remarks did not lead to a change in the HDP’s stance, and the polls in İstanbul ended in a significant opposition victory over the AKP.

Erdoğan’s governments and jailed PKK leader Öcalan have in the past conducted talks in order to reach a political settlement of Turkey’s Kurdish issue.

Talks broke down in the summer of 2015 after the HDP declined to rally behind Erdoğan’s proposal for the adoption of a presidential system of governance.

Since then, many HDP officials have stood trial and been imprisoned over alleged links to the PKK. Two former HDP co-chairs have been behind bars since November 2016. Tens of HDP mayors in Turkey’s predominantly Kurdish Southeast were removed and replaced by trustees appointed by the AKP-led Interior Ministry.