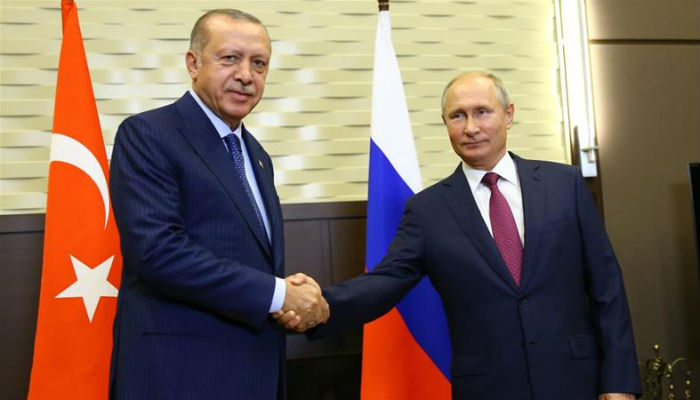 The leaders of Turkey and Russia said on Monday they had agreed to create a demilitarized buffer zone in Syria’s Idlib province to separate Syrian government troops from rebel forces, with Turkish and Russian soldiers patrolling the zone to ensure it is respected.

Russian President Vladimir Putin, speaking after talks with Turkish President Tayyip Erdoğan, said the agreement was that all heavy weaponry would be withdrawn from the zone and that “radically minded” rebels, including the Nusra Front, would have to pull out of the zone.

Speaking at a news conference with Putin in the Russian city of Sochi, Erdoğan said the two nations would carry out coordinated military patrols on the borders of the demilitarized zone.

The UN had warned of a humanitarian catastrophe if the Syrian army launched an all-out assault to retake Idlib.

But after Monday’s meeting between Putin and Erdoğan, Russian Defense Minister Sergei Shoigu said the deal meant there would be no such operation in the region.

Putin said that under the deal, all heavy weaponry, including tanks, rocket launch systems and mortar launchers operated by rebel groups would need to be pulled out of the buffer zone by Oct. 10.

Islamist militant rebel groups, including those of the al-Nusra Front, Putin said, would have to leave the zone.

It was not immediately clear if the zone included Idlib city, which would leave some rebels needing to withdraw from it.

Erdoğan said the agreement would “prevent a humanitarian crisis.”

He had earlier called for a ceasefire in northern Syria to prevent what he said would be a “bloodbath” and another major refugee crisis on Turkey’s southern border.