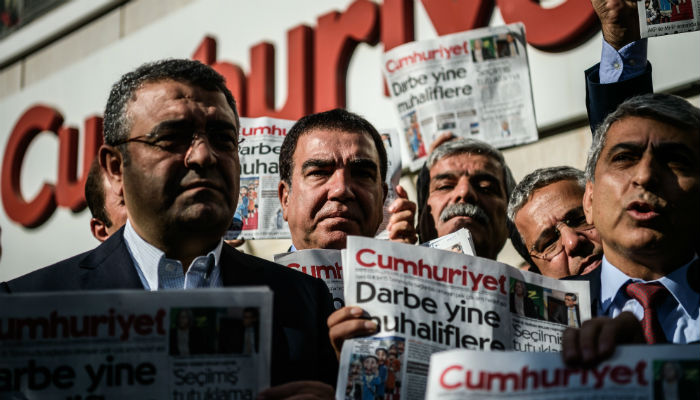 The three opposition parties in Parliament — the main opposition Republican People’s Party (CHP), the pro-Kurdish Peoples’ Democratic Party (HDP) and the Nationalist Movement Party (MHP) — have all slammed a government crackdown on the critical daily Cumhuriyet on Monday, resulting in the detention of more than 10 of its journalists.

CHP leader Kemal Kılıçdaroğlu attended an editorial meeting of the Cumhuriyet daily at its Ankara office on Monday where he said Cumhuriyet has always been the newspaper in Turkey to pay the heaviest price during coup times.

“We will not allow them [the government] to silence the free press and arrest journalists who perform their jobs fearlessly in order to inform the public,” said Kılıçdaroğlu.

Kılıçdaroğlu was accompanied during his visit by senior party officials including Levent Gök, Tekin Bingöl and Selin Sayek Böke.

“We will not allow the closure of this newspaper,” Canpolat said.

HDP Co-chairperson Selahattin Demirtaş described the operation against Cumhuriyet as one of those launched with the goal of establishing a dictatorial regime in Turkey.

“We will be in solidarity with the Cumhuriyet newspaper. We are faced with a new level of pressure coordinated by the [Justice and Development Party] AKP so that not even one source of opposition remains in the country,” said Demirtaş, speaking at a news conference at his party’s headquarters in Ankara on Monday.

MHP Balıkesir deputy İsmai Ok, who spoke at a news conference in Parliament on Monday, said: “The detention of the individuals who we know have been fighting against FETÖ for long years as part of a FETÖ operation can only water down the investigations [against the Gülen movement].

The İstanbul Chief Public Prosecutor’s Office on Monday issued detention warrants for 18 journalists from the daily over charges of aiding the terrorist Kurdistan Workers’ Party (PKK) and FETÖ.