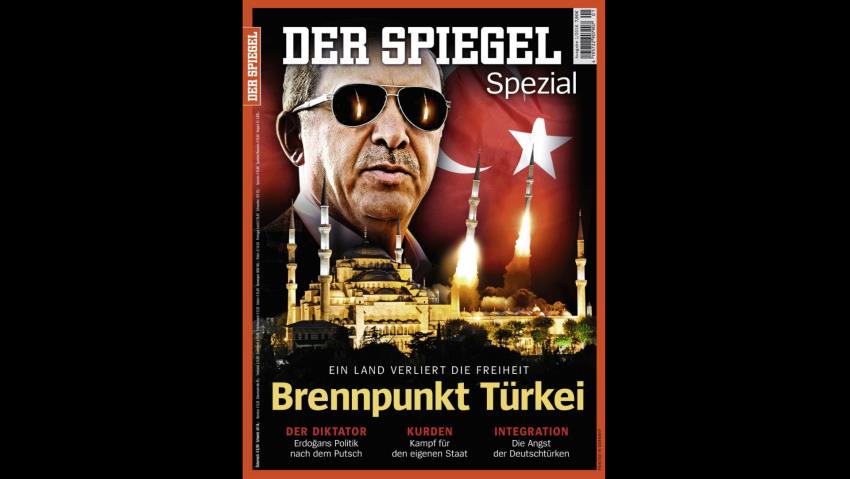 Officials from the Turkish government have lashed out at German magazine Der Spiegel over a special edition on Turkey in which the country’s president, Recep Tayyip Erdoğan, is portrayed as a dictator.

The Turkish government accused the weekly of giving a distorted view of the country in its “Focus on Turkey” special edition. Ankara accused Spiegel of prejudice and said the cover was “particularly provocative.”

The cover features a stone-faced Erdoğan wearing sunglasses as the minarets of Istanbul’s Blue Mosque appear to have been transformed into military rockets lifting off into the air. Under the main title, “Hotspot Turkey,” is the strapline “A land loses its freedom.”

At the bottom of the page, a teaser for one of the magazine’s stories is simply titled “The Dictator.”

The Turkish Foreign Ministry described the magazine’s publishing policy as “far from being responsible,” saying that it was “the clear and latest example of an anti-Turkey approach.”

In a statement Turkish Foreign Ministry spokesman Tanju Bilgic said the cover, published during the Eid al-Adha holiday, sought to create “a negative image not only about Turkey but also Islam.”

“We regretfully condemn the attempts … to smear Mr. President,” he added, urging an end to efforts to tarnish Turkey’s image.

“There is democracy in Turkey. Everyone is free. We declared a state of emergency. However, it is not meant for the people, but for the traitors. A state of emergency lasted for months in France. You saw what happened in Hamburg. They ignore all that and see Turkey this way. If there had been a dictatorship in Turkey, our heroic soldiers and police officers would have killed the traitors that came to kill our president,” said Eroğlu.

Turkey survived a military coup attempt on July 15 during which coup plotters among other things targeted the hotel Erdoğan was staying in in western Turkey. Erdoğan had left the hotel by the time the attack took place.

The government declared emergency rule following the coup attempt. Many accuse Erdoğan of using the failed coup as a pretext to consolidate his power and authoritarianism.