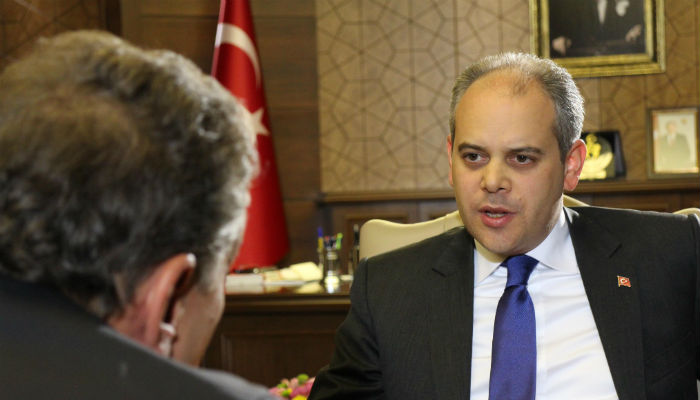 A crisis that erupted on Monday evening when officials from Turkey’s Youth and Sports Ministry seized video footage of an interview German broadcaster Deutsche Welle (DW) conducted with Minister Akif Çağatay Kılıç has grown further with the ministry defending its action on the grounds that the minister was asked questions about which he had not been previously informed.

A statement from Kılıç’s press officer, Übeydullah Yener, said the interview tape was taken because DW host Michel Friedman asked questions that had not been cleared in advance.

“There was no ‘authorization’ for the interview. The questions asked were not the ones that were planned. Mr. Friedman himself knows exactly why this happened. Some statements were [outright] allegations. In [this] situation, there was no authorization granted,” Yener told Deutsche Welle’s Turkish language department.

The ministry later explained its position in a post on its website in which it blamed DW for the unpleasant incident, claiming that Friedman had “overstepped the mark with expressions and accusations.” It also maintained that the move to take the video had been in line with a policy stipulating that interviews require “authorization,” which also exists in Germany.

An official from the ministry also denied that the footage had been “confiscated,” telling AP that “no force” had been used and that the outlet had turned over the video after agreeing to a request not to air the interview.

Friedman denied claims that the questions had been agreed beforehand.

“Journalists aren’t there to ask the questions that politicians like,” Friedman said, adding that in his 20-year journalistic career he had never experienced such a course of action – “even in countries where dictatorships still play a role.”

“This is proof that freedom of the press in Turkey is very restricted,” Friedman said. “The incident is very disturbing. If the foreign media is already being treated in this manner, one could well imagine how difficult it is right now for Turkish journalists.”

During the interview, which took place at the ministry building in Ankara, Friedman asked Kılıç questions about the failed military coup attempt on July 15, mass purges and arrests that began in the aftermath of the putsch, the situation of the Turkish press and the place of Turkish women in society. Kılıç was also asked to elaborate on some remarks by President Recep Tayyip Erdoğan on these issues.

News of the confiscated video footage on Tuesday also prompted an outcry on social media over Turkey’s restrictions on press freedom. The German Journalists Union (DJV) called for an immediate release of the video.

“That is the most severe offense against press freedom, like we only know from dictatorships,” criticized DJV Chairman Frank Überall.