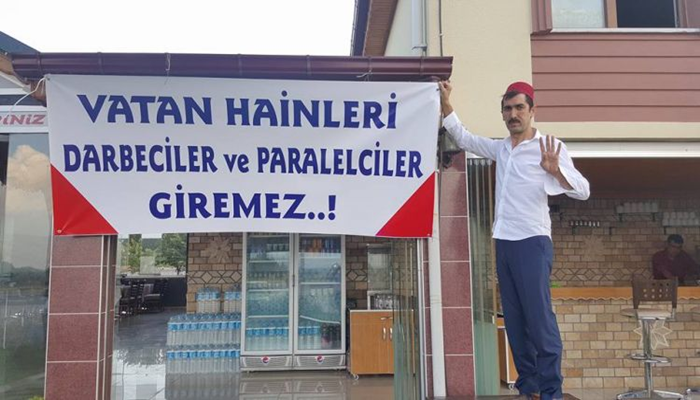 “Traitors, putschists and parallels not are allowed in,” the huge banner hung on the side of a restaurant in Denizli’s Acıpayam district states, in clear reference to the Gülen movement, which the government accuses of masterminding a coup attempt on July 15.

“Parallels” refers to members of the alleged terrorist network of the movement within state institutions.

The incident was the latest of such discriminatory language adopted by both top state officials and ordinary shopkeepers across Turkey.

Among the insulting words that President Recep Tayyip Erdoğan in particular has been using to describe sympathizers of the movement over the past three years are viruses, parallels, assassins, thugs, bloodsuckers, infidels, puppets of foreign countries and secret agents.

Early in August, a Konya stallholder hung a banner that read “Gülenists are not allowed to shop here” on his sales booth, revealing the dimension of demonization of the Gülen movement and its followers across the country.

Another banner in Istanbul stated in mid-August “Parallels and sympathizers of parallels not allowed inside the restaurant,” and the director of education in Ankara’s Altındağ district was publicly asked if she was a Gülenist, in two banners hung on a pole in the street this weekend.

Turkey survived a military coup attempt on July 15 that killed over 240 people and wounded more than a thousand others. Immediately after the putsch, the government along with President Recep Tayyip Erdoğan pinned the blame on the Gülen movement. Despite Gülen and the movement having denied the accusation, Erdoğan — calling the coup attempt “a gift from God” — and the government launched a widespread purge aimed at cleansing sympathizers of the movement from within state institutions, dehumanizing its popular figures and putting them in custody.

Thousands of people have been purged from state bodies, over 41,000 detained and more than 22,000 arrested since the coup attempt. Arrestees include journalists, judges, prosecutors, police and military officers, academics, businessmen, governors and even a comedian. (Turkey Purge)