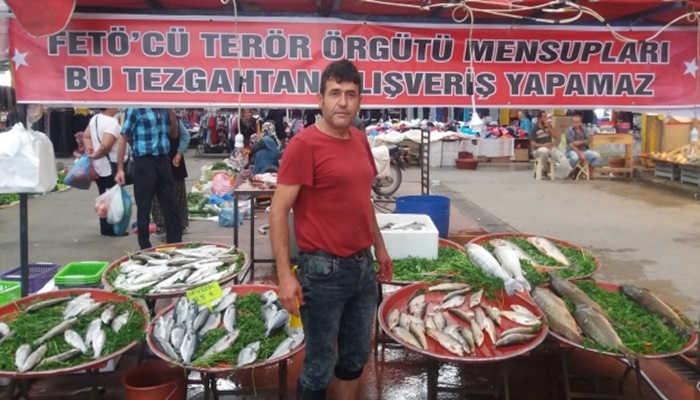 A Konya vendor has hung a banner on his stall that reads “People affiliated with the Fethullahist Terrorist Organization are not allowed to shop here,” revealing once again the depth of the demonization of the Gülen movement and its followers in Turkey.

Speaking to the pro-Justice and Development Party (AK Party)-Islamist daily Yeni Şafak, vendor Mustafa Görür called the movement’s followers “infidels” and added: “God curse them all [the movement followers]. This banner will not negatively affect my sales. Our future is important. We won’t allow them to do something like that [attempt a coup].”

The AK Party government and President Recep Tayyip Erdoğan have designated the faith-based Gülen movement, which runs charities, schools and businesses around the world, as a terrorist organization and have launched a widespread crackdown on suspected members since the failed coup attempt. The government accuses the movement of masterminding the coup attempt, although the movement denies any involvement. (Turkey Purge)

Turkey’s Democracy and Liberties Island: a site of memory, or the AKP’s new profit-making venture