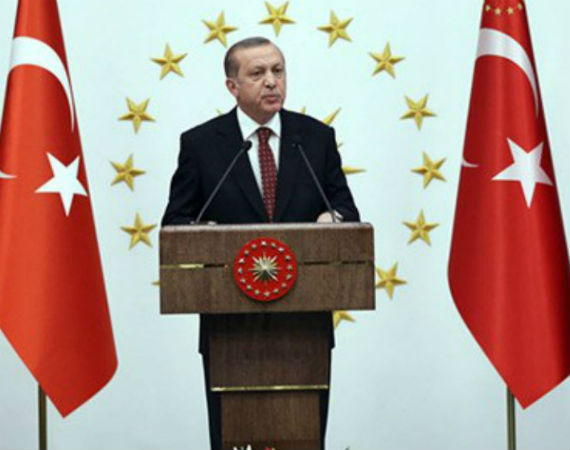 Turkish President Recep Tayyip Erdoğan has told lawmakers from the pro-Kurdish People’s Democratic Party (HDP) that they will “eventually” lose their parliamentary immunities from prosecution as Parliament is set to debate a bill that allows prosecution of deputies.

“You will be eventually touched. I welcome the recent compromise [among parties on a bill on lifting parliamentarians’’ immunities]. The parliamentary process on this issue will start next week. All [judicial] cases [which are on hold due to immunities of deputies] will be forwarded to judicial authorities,” Erdoğan said, referring to some HDP deputies who are accused of having links to the terrorist Kurdistan Workers’ Party (PKK).

Arguing that there is no other country which “keeps the bar on rights and freedoms so as high as Turkey” while at the same time fighting with terrorism as much as Turkey does, Erdoğan said it is unacceptable for deputies to lend support to terrorists.

“You know the issue of parliamentary immunities. He is called a deputy but he transports weapons to terrorisrs with his own car, he turns his house into a headquarters for terrorists, insults at our members of the judiciary and security forces and he defends the terrorist organization [PKK]. Is such an immunity possible? You have immunity while speaking in Parliament. But if you use this opportunity to support the terrorist organization, you would be sooner or later touched,” the president said while addressing mukhtars at the presidential palace on Tuesday.

The main opposition Republican People’s Party (CHP) and the opposition Nationalist Movement Party (MHP) have already lent support to a proposal recently filed by the ruling Justice and Development Party (AK Party) on lifting immunities of deputies from prosecution.

The proposal, which was submitted to Parliament last week with the support 316 AK Party deputies, suggests lifting the immunities of all deputies who currently face probes.

The proposal particularly targets some deputies from the HDP, who have been long accused of supporting the PKK by the government.

The AK Party’s controversial proposal seeks to amend Article 83 of the Constitution which says: “A deputy who is alleged to have committed an offence before or after election shall not be detained, interrogated, arrested or tried unless the General Assembly decides otherwise.”

If the change is approved in Parliament, this provision will not be applied to cases already filed against lawmakers and all the files of summaries of proceedings currently waiting in Parliament’s Joint Constitution and Justice Commission, the Parliament Speaker’s Office, the Prime Ministry and the Justice Ministry will be returned to the Prime Minister’s Office within 15 days after the amendment goes into effect in order to be sent to the judicial authorities.

During his speech, Erdoğan also reiterated that Turkey has “frozen” the settlement process launched in 2012 to address the Kurdish issue. “It is now the period of [military and police] operations [against the PKK]. What will happen during this period? This issue will be solved,” he said.