Turkish police fired tear gas and plastic bullets at hundreds of protesters who gathered in front of the Zaman daily following government’s seizure of the Feza Media Group on Friday night.

Police violently intervened in a group of protesters, mostly women, who gathered in front of the daily on Saturday to protest a decision by an İstanbul court to appoint trustees to take over the management of the daily.

“Free press cannot be silenced,” the protesters were shouting before they were brutally dispersed by the police which used large amounts of tear gas, water cannon and plastic bullets.

An İstanbul court appointed trustees to take over the management of the Feza Media Group, which includes Turkey’s biggest-selling newspaper, the Zaman daily, as well as the Today’s Zaman daily and the Cihan news agency, dealing a fresh blow to the already battered media freedom in Turkey.

Also on Friday night, police in riot gear pushed back Zaman supporters who stood in the rain outside its İstanbul office where they waved Turkish flags and carried placards reading “Hands off my newspaper” before they were overcome by clouds of tear gas. 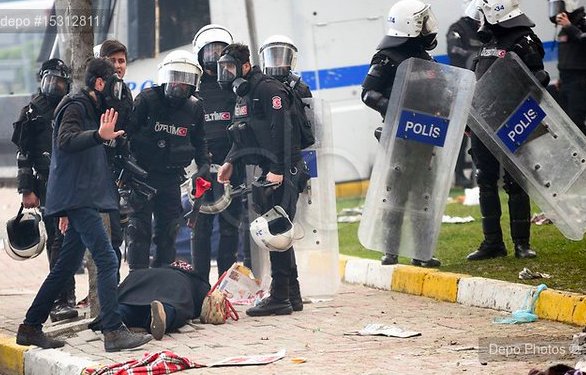