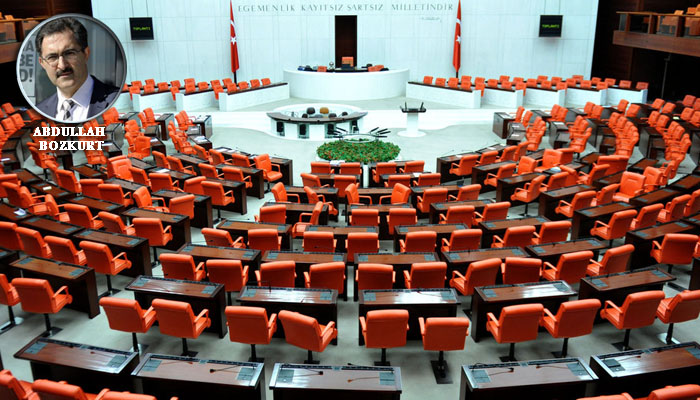 One of the most lethal blows dealt to the democratic functioning of the government, the rule of law and the legitimacy of the system of governance in Turkey was the adoption of recent changes to the bylaws of the Turkish Parliament right before the summer recess. The opposition’s role in overseeing the government’s actions, holding them to account and ensuring transparency, accountability and efficiency in the executive branch through motions, speeches, bills and debates has been significantly curtailed.

The Turkish Parliament has now become a dysfunctional body that is powerless in preventing misuse, abuse and waste of state resources. If the extent and the degree by which the opposition is granted powers to scrutinize actions and policies of the government are among important markers for judging the maturity of a democratic system, Turkey has hit the bottom with the elimination of important means provided to the opposition in the parliamentary bylaws. That actually defied the benchmarks set up by the Council of Europe with which Turkey is committed to comply as one of the founding members.

The bylaws restricted the powers of the opposition parties to participate in or review legislative acts, limited their role in supervising the executive branch, cut back on speaking times and restricted venues for moving motions, proposals and amendments in the plenary. The immunities for members of Parliament were narrowed, their right to exercise freedom of speech was restricted and unwarranted disciplinary actions were brought forward such as insulting the president or the common history of Turks.

Given the fact that Erdoğan has been able push any bills he liked through Parliament, albeit at times with difficulty and through time-consuming processes, the main motivation behind these recent changes is to silence critical and opposition voices that are being heard from the podium of Parliament. The Turkish media is now under the almost full control of the Erdoğan government, with 275 journalists jailed, 109 more wanted for arrest and 200 media outlets shuttered and seized. Parliament remains perhaps the only venue for opposition and critical voices to be heard by the public. Erdoğan has gone after that last sanctuary and succeeded in muffling critical voices by and large with the removal of key powers of the opposition groups.

The changes, pushed forward by President Recep Tayyip Erdoğan’s ruling Justice and Development Party (AKP) and his nationalists partners, violate Resolution 1601 (2008) that was adopted by the Parliamentary Assembly of the Council of Europe (PACE) on Jan. 23, 2008 titled “Procedural guidelines on the rights and responsibilities of the opposition in a democratic parliament.” Turkey has also distanced itself further from the guidelines adopted by the CoE’s Venice Commission (aka the European Commission for Democracy through Law), which issued an opinion on “the role of the opposition in a democratic society” on Oct. 15-16, 2010.

The bylaws of the Turkish Parliament had been in effect for 44 years since they were approved on March 5, 1973. Erdoğan attempted to change them several times but decided to drop it when the uproar by the opposition forced him to rethink the move. When he finally consolidated his powers after an April 16, 2017 constitutional referendum that gave him imperial powers, he pushed that change again with the help of a yearlong emergency rule that put the major opposition parties on the ropes, with many lawmakers being arrested and prosecuted amid mass persecution. He gave legislators their orders on June 13, 2017 in his parliamentary group speech during which he said Parliament must not go to recess without making changes to the bylaws. On the last day of the parliamentary session, July 27, 2017, the proposal to change the bylaws was debated and approved in the plenary. It was published on Aug 1, 2017 in the Official Gazette, thereby going into effect.

The changes were ostensibly made to speed up the lawmaking process in Parliament, which is not found to be credible given the fact that Erdoğan had been able to rush bills through commissions and the plenary using the AKP’s majority. Whenever his party felt the heat, the Nationalist Movement Party (MHP), a former foe-turned-new-ally, quickly came to the AKP’s aid. What is more, the focus should be more on the quality of the lawmaking process rather than hastily adopted laws without involving all the stakeholders in the process, from civil society and academia to the media and others. The AKP-controlled Parliament has already done away with the impact analyses of impending bills that are required to avoid unintended consequences before they are approved by Parliament.

As a result, the imposing and overbearing attitude of the AKP has overcome a compromise approach in the legislative process in the Turkish Parliament, which opens Parliament’s acts up to further questions in terms of legitimacy and general acceptance in the society. For example, with the revised Article 3 of the parliamentary bylaws, Erdoğan hopes to disqualify popular opposition lawmakers from acquiring immunity status from politically motivated criminal prosecution. The change requires that deputies take an oath to enjoy parliamentary privileges even if they win the elections. Because jailed deputies would not be able to take to the podium for the swearing-in ceremony, Erdoğan’s AKP will strip the parliamentary status of these lawmakers. The same also goes for others who are prevented from attending sessions for various reasons.

The amendment that changed Article 19 of the bylaws halved the amount of the time allowed for opposition parties to speak when they submit a motion to the agenda in the plenary. Previously, each political party group had the right to advance their own motions and was allowed to speak for 10 minutes for a deputy and 20 minutes in total for a group. The groups that opposed the motion had the same rights. This is actually the main tool used by the opposition in Parliament to raise their voices on various issues and offer opposing views. With the changes, the time allotted for the opposition was reduced to five minutes for a member of Parliament who moves the motion and three for those who oppose it. Likewise, Article 63 of the bylaws was changed to cut back time for deputies who raise procedural debates in the plenary from 10 to three minutes.

The changes to Article 37 of the parliamentary bylaws drastically reduced the rights of each deputy in Parliament to propose bills in the plenary. Every lawmaker now has only one shot at moving a bill in the plenary in one legislative session, which could be as long a period as the time between elections. Moreover, political party groups would have to take turns each week in moving such bills in the plenary. Considering that there are currently four political party groups in the Turkish Parliament, each political group would have only one chance in a month to propose a draft bill in the plenary. In both cases, this right can only be exercised on Tuesdays. As a result, the opposition’s right to suggest draft bills was seriously undermined. This is for the benefit for Erdoğan’s ruling AKP, which has a majority in Parliament, while punishing opposition parties and independent deputies.

The revamped Article 57 of the bylaws limited the opposition’s right to have a roll call in the plenary to determine whether there are a sufficient number of members to hold the session. This was also another important instrument used by the opposition to slow down rushed bills during debates. Interestingly enough, ruling party lawmakers often fail to have the required number of legislators in the plenary, giving the opposition more opportunities to request roll calls.

The change to Article 73 removed the opposition’s right to submit an oral amendment to the parliament speaker’s actions in reshuffling bills to the relevant commission. It now requires that the amendments be submitted in writing. Article 81 states that the visual assessment of the parliament speaker in moving or dropping the articles of a draft bill during a debate will be enough unless a total of 20 lawmakers request a formal count. This will make it difficult to identify how each lawmaker voted on a specific bill, articles and amendments during the debate and make it impossible to determine how many voted for a change to draft bills. Not knowing how lawmakers voted on a specific issue casts a long shadow on the track record of lawmakers in the eyes of their constituencies and should be regarded as a serious blow to accountability and transparency.

The change to Article 102 removed the opposition’s right to have motions for a general debate or the establishment of an inquiry commission read out loud in its entirety in the plenary. Instead, a summary of the motion will be forwarded to lawmakers and the government in advance. That robs the public of the right to know what the general debate or motion for the establishment of an inquiry commission is about. These motions are important tools for the opposition to expose wrongdoing within the government and generate public interest and discussion. For example, through these motions Turks were able to learn how Erdoğan’s AKP refused dozens of motions on investigating Islamic State in Iraq and the Levant (ISIL) networks in Turkey because they implied the complicity of Erdoğan and his associates.

Article 160 was changed to impose penalties and disciplinary actions on lawmakers who disrupt the plenary by bringing placards, banners and similar materials to the assembly floor. The change is quite subjective and open to all sorts of interpretation. It may very well be used to censure opposition lawmakers who exercise their right to freedom of speech in various forms. In the past the lawmakers staged various protests in Parliament such as wearing T-shirts that advocated freedom of the press, carrying pictures of jailed lawmakers and wearing hard hats to remember victims of mining accidents. They can now be subject to disciplinary action under this change.

Article 161 sees the temporary expulsion of lawmakers from the plenary when he or she offends or insults the Turkish president, parliament speaker other lawmakers; levels accusations against the history of Turkey and its common past; or mocks the constitutional order and questions regime structures that are accepted in the constitution. These are very broad and vague definitions that are often exploited in Turkey, especially in the criminal justice system, where thousands of people are charged with insulting Erdoğan, defaming the Turkish nation or attempting to change the constitutional order. The change would dramatically restrict the freedom of speech of the lawmakers in the Turkish Parliament. Disciplinary actions such as expulsion are also reinforced with fines such as cutting the salaries of lawmakers, which would further discourage them from speaking up.

Although these changes that were approved by Parliament are in violation of constitutional articles, there is no chance for the opposition to have them annulled even if they file a petition with the top court. Everybody knows that the Constitutional Court is tightly controlled by Erdoğan and would not be able to render any decision that is not to the liking of Turkey’s authoritarian ruler. The arrest of two justices of the Constitutional Court last year on trumped-up coup charges despite their immunity was a shot fired by Erdoğan across the bow of Turkey’s top court. The court has since been handing down decisions that are nothing but rubberstamp rulings according to the whims and emotions of the Turkish president. As a result, the role of legislature in checking government actions and bringing issues to public debate has been effectively wiped out with the recent changes.

Turkey as we know it has ceased to exist, with pluralist democratic structures dismantled, the rule of law suspended and the legislative role of overseeing government actions no longer tolerated.