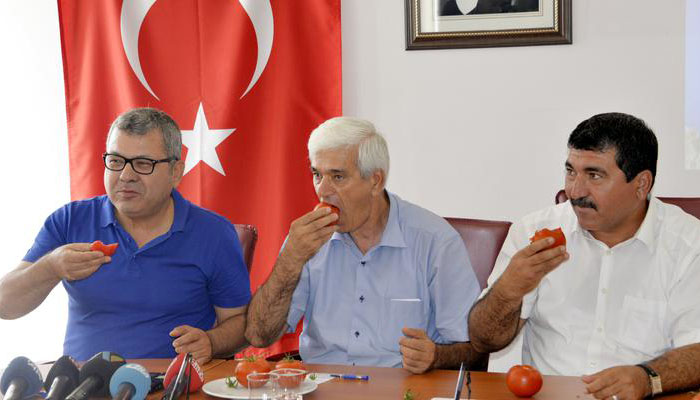 Turkish farmers from the Antalya Fresh Fruit and Vegetable Association protested Russia’s import restrictions on fruits and vegetables from Turkey by eating tomatoes during a press conference on Monday.

According to the Doğan news agency, Nevzat Akcan, head of the association, said Turkish farmers had waited for the re-opening of the Russian market ahead of the new season but were disappointed by negative statements from Moscow on fresh fruit and vegetable imports.
Antalya Chamber of Agriculture President Nazif Alp slammed Russia’s criticisms that tomatoes were hormone-injected and invited Russian academics to Antalya to examine their hormone claims.

Farmers and wholesale market staff who attended the press conference ate tomatoes to protest measures taken by both Russia and Turkey.

Following a crisis between the two countries after Turkish jets downed a Russian aircraft near the Syrian border in 2015, Russia banned Turkish tomato imports. Ties between Ankara and Moscow largely normalized after President Recep Tayyip Erdoğan formally apologized his Russian counterpart, Vladimir Putin, in the summer of 2016, although the ban remains in place.