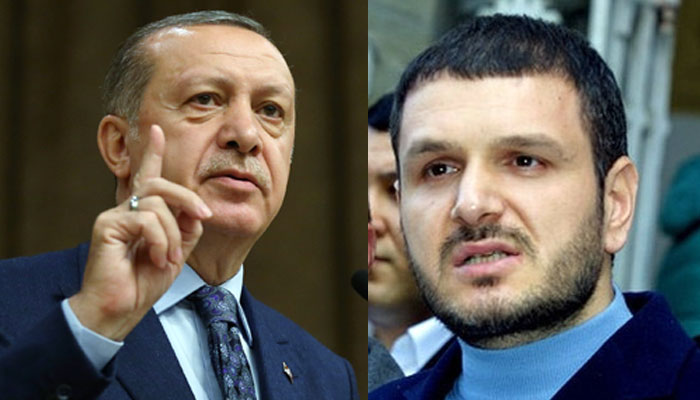 The illicit working relationship between the autocratic Islamist president and the mafia was well documented in a series of incidents where Erdoğan helped mobsters act with impunity. There are even photos showing Erdoğan receiving and talking with convicted mobsters who apparently signed up to do the Turkish president’s dirty bidding in Turkey and abroad. There is a precedent for this from the 1980s when MİT had used mobsters for a series of hits targeting the Armenian diaspora and in the 1990s when mafia leaders were contracted to kill prominent figures linked to the Kurdish political movement. But never before have top leaders seen public conspiring with known mafia leaders until Erdoğan, who seems to rather enjoy his backing in the underworld and uses them to intimidate his opponents.

Kürşat Mican, an ultranationalist figure who has been enlisted by MİT as a go-between with Turkish youths to recruit jihadists to fight in Syria, showed up in front of the Neve Shalom synagogue late on July 20, 2017, with a group of militants, calling for jihad in front of the cameras. His thugs kicked and threw rocks at the building, while one climbed up on the wall to hang a banner. It was bizarre that they were protesting the Israeli government’s restrictions on Palestinians’ entry to the al-Aqsa mosque in Jerusalem by threatening Turkish citizens of Jewish background. Instead of protesting before the Israeli consulate in Istanbul or embassy in Ankara, which represent the government, Mican led the group to the front of the synagogue.

Mican vowed to return to prevent Jews from attending the synagogue and later attended a funeral service for Muslims slain during clashes in Jerusalem at which he repeated his anti-Semitic remarks. The action plan, crafted by MİT’s Istanbul branch, was to support Erdoğan’s remarks which stated repeatedly that many mosques in Europe and other Western countries had been attacked by Islamophobic people and that the host governments did nothing to prevent it. On the other hand, he has repeatedly said — especially during tension with the Netherlands and Germany in March-April 2017 — that his government has never allowed any attack to proceed against Jewish or Christian religious institutions. He uttered similar remarks on controversial security measures put in place by Israel around the al-Aqsa mosque.

But the plan in Istanbul did not work out the way Turkish intelligence contemplated, and several people from Mican’s group kicked and threw stones at the synagogue, and one climbed on the façade of the building. Mican publicly announced he and his friends would come back again but was privately advised to not to, a request he complied with. Delivering a speech in Parliament five days later, on July 25, 2017, Erdoğan said: “Look, we have taken measures against attacks that were planned against synagogues in our country over events at Masjid al-Aqsa, and thank God, no serious incidents have taken place with the exception of some minor wrongdoings.”

Public records show Mican was involved in an organized crime network in June 2015 when he was part of a plot involving the abduction of a businessman for ransom at the age of 23. Zübeyir Temurtaş was abducted by Mican and his gang of 12 in the Eyüp district and was tortured for eight days. He was detained as he was about to pick up the ransom money. It turned out Mican and his gang were using code names borrowed from the popular anti-Semitic TV series “Kurtlar Vadisi” (valley of the wolves) during this kidnapping conspiracy.

Apparently, Mican’s deep connections to the Turkish state helped save him from legal troubles. He and his thugs also threatened the LGBT pride march and parade participants with violence in 2016 and 2017. A court case was launched against him on charges of incitement to violence at the Istanbul 44th High Criminal Court in Kartal. Yet neither Mican nor his lawyer bothered to make the trip to the courthouse to respond to the charges at a hearing on May 18, 2017. The court did not have the courage to issue an arrest warrant for him despite his failure to appear and rejected the LBGTI lawyers’ motion for his detention pending trial. The next hearing is scheduled for Oct. 5, 2017. The prosecutor seeks up to a year in prison for him, meaning that even if he is convicted, which is less than likely, he won’t serve any jail time.

Mican is the deputy chairman of the Alperen Hearths, an ultranationalist and religiously conservative youth organization linked to the right-wing nationalist Grand Unity Party (BBP), a close ally of President Erdoğan. In the last referendum held on April 16, 2017, the BBP and its leader Mustafa Destici supported Erdoğan. Alperen Hearths is a breeding ground for young, extreme nationalist militants who were used by factions in Turkey’s intelligence MİT to carry out hits. For example, Ogün Samast, who assassinated prominent Turkish-Armenian journalist Hrant Dink in Istanbul on Jan. 19, 2007, was linked to the Alperen group.

Three Christians, including German national Tilmann Ekkehart Geske, who operated the Zirve Publishing House, which published Bibles and other Christian literature in the southeastern city of Malatya, were brutally murdered on April 18, 2007. Emre Yıldırım, who was among the killers, was found to be affiliated with the Alperen group. Catholic priest Andrea Santoro, who served at the Santa Maria Church in Trabzon, was shot to death on Feb. 5, 2006. It turned out that the16-year-old murder suspect, Oguzhan Akdin, was linked to Alperen.

It was no surprise that Orhan Övet, who attacked main opposition Republican People’s Party (CHP) leader Kemal Kılıçdaroğlu in Parliament on April 9, 2014, was affiliated with the Alperen group, according to Övet’s own testimony. He was also a member of Erdoğan’s ruling Justice and Development Party (AKP). The court released him the next day and the case was hushed up. The attack was another sinister plan by Erdoğan, who wanted to intimidate the country’s most important opposition leader, which appeared to have worked well given how the CHP chairman started softening his opposition to the Erdoğan government.

There are other mobsters Erdoğan signed up for his underworld army of thugs. Among them the most prominent figure is Sedat Peker, a gang leader convicted of several crimes who served time in prison. He was released in 2014 thanks to the Erdoğan government and now parades in Turkey as if the de facto interior minister. He poses cheerfully with the Turkish president at VIP events and is treated as if part of the official protocol, sitting in the front row at official events. He publicly declared war against Erdoğan’s opponents. In March 2016, he asked Turkish intel agency MİT to train Chechen fighters to stage bomb attacks in Moscow. He threatened those who were against the Erdoğan-endorsed April 16 referendum to vote on a change in the country’s system of governance. He posted a video message in March 2017 warning Europe that when the times comes, he will get Turkish youths in the streets of Europe to stage violent actions.

In July 2017, he said they would hang all people linked to the Gülen movement from flagpoles and trees. His remarks came a day after Erdoğan targeted people linked to the movement in a speech in which he said: “They [Gülen movement members] are a disease. … First we will cut off the traitors’ heads.” Peker had also threatened academics who signed a petition calling for peace and ending the Kurdish conflict in 2015. “We will spill your blood in streams and we will shower in your blood,” said Peker, in a message titled “The So-Called Intellectuals, The Bells Will Toll for You First,” posted on his personal website on Jan. 13, 2017. An investigation was launched into his remarks, but no one realistically expects him to be prosecuted as long as Erdoğan covers for him.

Erdoğan has also set up a youth group called Osmanlı Ocakları (Ottoman Hearths) based on the mafia code of conduct, and the group is actively training young people from the AKP’s youth branches. The leader of the Ottoman Hearths, Kadir Canpolat, has called on all supporters of Erdoğan’s AKP to take up arms in the event of a second coup attempt in Turkey. He was among six suspects who were detained before the visit of Pope Benedict XVI on Nov.30, 2016 on charges of attempting to stage an armed attack on the pope. He was later released. Canpolat was affiliated with the Alperen group at the time, according to police records. He has connections to Mustafa Öztürk, a suspect in the murder of journalist Hrant Dink. Canpolat has pictures with Erdoğan and appears to be backed by the AKP government.

Two mob attacks targeting the Hürriyet daily headquarters in Istanbul on Sept. 6 and 8, 2015 were claimed to be organized through the Ottoman Hearths. The group was also implicated in sweeping attacks targeting CHP headquarters in Ankara’s Sincan district and the pro-Kurdish Peoples’ Democratic Party (HDP) on Sept. 8, 2015. An incident in which a man threw a bullet, often used by mobs to issue a death threat, at CHP leader Kılıçdaroğlu during a funeral for two police officers killed in a June 7, 2016 attack in Istanbul’s Vezneciler neighborhood was also blamed on the Ottoman Hearths. Commenting on the attack, Erdoğan said “a politician should know what to say and where. Incitement can lead to reactions. It’s a matter of action-reaction.” Bülent Turan, the deputy parliamentary group leader of the AKP, said throwing a bullet was nothing more than a “natural reaction” and a means of “sharing the pain.” A man involved in throwing the bullet was detained but quickly released.

The Turkish president’s ties to the underworld to bully his opponents in Turkey and abroad must be taken very seriously considering the bloody and murderous past of the mafia leaders he has been involved with. Obviously, Erdoğan has been encouraging mafia gang membership, activity and violence to sustain his campaign of fear and protect his allies in the underworld from criminal prosecution and investigation. Given the resources and capabilities of the Turkish intelligence agency that are placed at the disposal of the mafia and the crime syndicates that vowed their allegiance to Erdoğan, the godfather of the mafia state in Turkey, there are more reasons to be concerned about what Turkey can and will do in other countries where the Turkish diaspora can be mobilized. It looks like Germany and the Netherlands have already taken preventive measures to crack on these illicit networks, and more will follow on that in other countries.