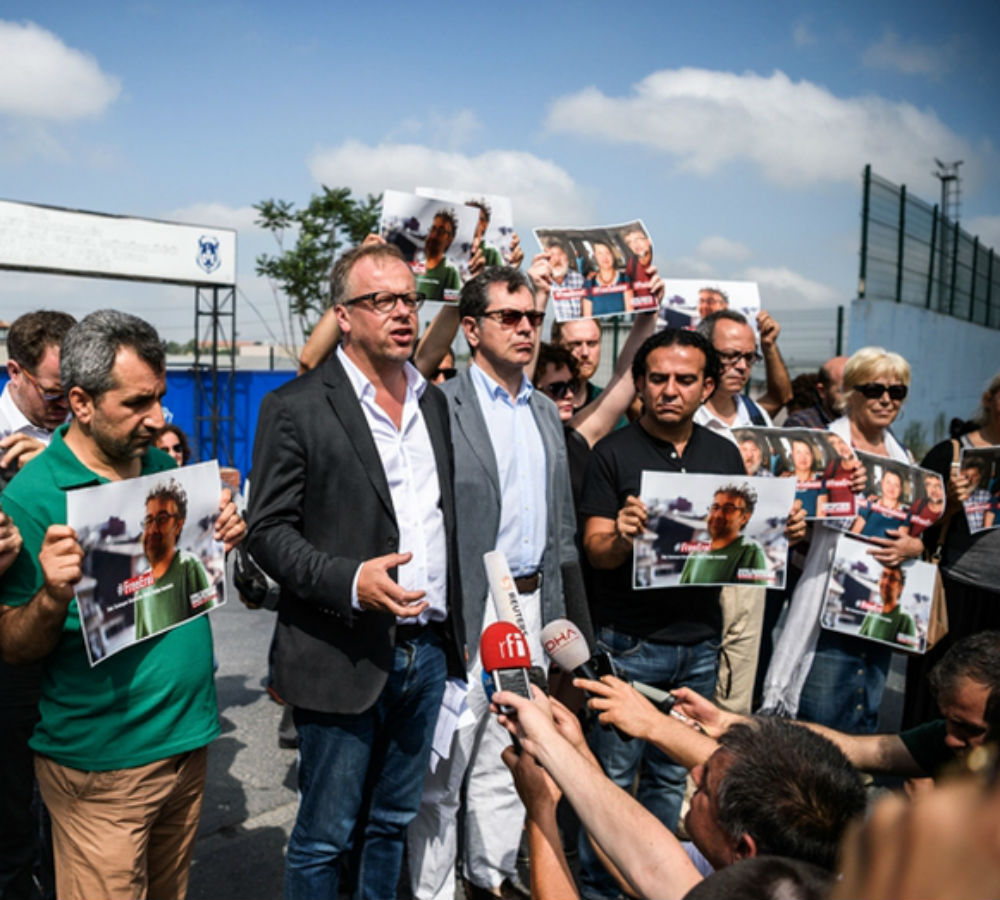 Members of the Reporters Without Borders (RSF) and Freedom for Journalists Platform (GÖP) gathered in front of Metris Prison in İstanbul to protest against recent arrests of academic Şebnem Korur Fincancı, writer Aziz Nesin and journalist Erol Öderoğlu.

The Founding President of the Turkish Human Rights Foundation (TİHV) Professor Şebnem Korur Fincancı, Turkey Representative of RSF Erol Önderoğlu and  writer Ahmet Aziz Nesin, were arrested on Monday over charges that include “making propaganda of a terrorist organization.”

Cumhuriyet daily columnist Kadri Gürsel spoke to the press on behalf of the protesters, saying that his colleagues are arrested for a crime they did not commit.

“They are charged with supporting terror due to serving as editors-in-chief on duty for a newspaper for only a day. This is an attack on press freedom, human rights and freedom of expression. We are here today to minimize the damage attacks such as these bring to Turkey. If those who put our friends behind bars aim at destroying or hindering cooperation of journalists and the fight for press freedom, they should know that this fight would only grow stronger. The proof for that is our existence right here. We demand our friends to be released immediately,” Gürsel said.

Fincancı, Nesin and Önderoğlu have been serving as temporary editor-in-chief for the Özgür Gündem daily, which has been under government crackdown recently. Press freedom activists launched a campaign in solidarity with the daily, where prominent journalists and academics serve as “editor-in-chief on duty” for the newspaper.

An İstanbul prosecutor recently requested prison sentences between 2 to 14 years for five people who participated the campaign, including Fincancı, Nesin and Önderoğlu.